What are transitive and intransitive verbs?  While the concepts might sound difficult, they are easier to understand when you think about the verb and whether there is an object receiving the action of the verb.

A transitive verb is a verb that requires an object to receive the action.
Example:

Correct: The speaker discussed different marketing strategies in the video.

Incorrect:  The speaker discussed in the video.

The verb discuss requires an object (different marketing strategies). It is necessary to state what the speaker discussed.

A transitive verb can take more than one object.

Donovan gave his sister a laptop.

Donovan gave a laptop to his sister.

You can figure out the direct object by using this question format: “The subject did what?” or “The subject [verb] what?”

The instructor addressed what?
the student’s question

Miriam borrowed what?
the methodology book

Can you bring what?
your copy of the text book

The committee members will raise what?
money

You can find the indirect object by asking the question “To whom?” or “For whom?”

Donovan gave a laptop to whom?
his sister

Correct: The students arrived at the residency in Houston.

Other action verbs, however, can be transitive or intransitive, depending on what follows in the sentence. Compare these examples:

Because of blood sugar problems, Rosa always eats before leaving for school.

If there is no leftover pizza, Rosa usually eats whole-grain cereal.

During cross-country practice, Damien runs over hills, through fields, across the river, and along the highway.

In the spring, Damien will run his first marathon. 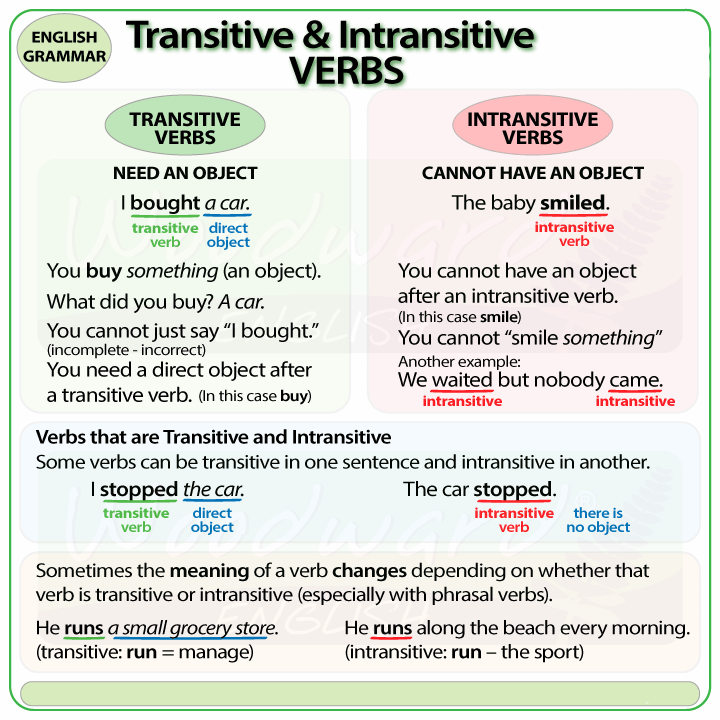 (Next Lesson) Stative and Dynamic Verbs
Back to Verbs