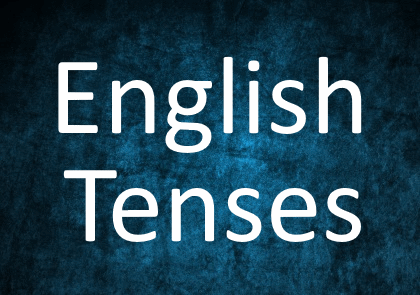 The tense of a verb tells you when a person did something or when something existed or happened. In English, there are three main tenses ( English tenses): the present, the past, and the future.

The present tense (e.g. I am, she works, we swim, they believe) is also called the present simpleor simple present. It's mainly used in the following ways:

to talk about something that exists or happens regularly (she goes out every Saturday night; it always rains here in winter; I start work at 7.30 a.m.).

to refer to a future situation in certain cases and in some subordinate clauses (the bus arrives in London at 6 p.m.;  I'll make us some coffee when we get home).

The past tense (e.g. I was, he talked, we had, they worked) is also called the past simple or simple past. As its description implies, it’s used to talk about things or situations which happened in the past, that is, before the present time of speaking. Its main uses are as follows:

to refer to an event or situation which happened once and is now finished (I met Lisa yesterday; we ate a huge breakfast this morning; they walked ten miles that day; you told me that before).

to describe a situation that lasted for a longer time in the past but is now finished (he went to college for four years; my  family lived in Oxford in the 1980s;  I loved her for ages but never told her).

to talk about an event that happened regularly or repeatedly but is now over (she calledfor help over and over again; we ate out every night last week; I phoned him three times today).

The future tense (e.g. I shall [or will] go; he will talk; we shall [or will] have; they will work) is used to refer to things that haven’t yet happened at the present time of speaking, but which are due, expected, or likely to occur in the future.  Here are the main situations in which the future is used:

to give or ask for information about the future (you will be in California tomorrow; how long will the journey take?; OK,  I’ll write that report on Thursday).

to talk about things that we think are likely or possible to happen in the future, but which aren’t completely certain (I think she’ll retire soon; he won’t [will not] stay married to her for long; you’ll never lose weight, you like food too much).

to refer to conditional situations, namely things that will or may happen if something else occurs (if it’s hot I’ll go swimming later; you’ll get stressed out if you work all the time).

to make promises or threats, or to state decisions at the time of speaking (Fine, I’ll call you soon; Are you going into town? We’ll give you a lift; I’ll never speak to you again).

The future tense is formed with will (or shall) and the infinitive of the verb without ‘to’. Learn more about when to use will or shall.

There are two further types of tense: the continuous and the perfect. These tenses are sometimes referred to as aspects or forms rather than tenses. The term aspect/form is used in grammar to talk about the form of a verb that shows, for example, whether the action happens once or repeatedly, is completed or still continuing.

These tenses (also called progressive tenses) are used to talk about actions that continue for a period of time. They are formed with the relevant tense of the auxiliary verb  to be and the present participle of the main verb. There are three main continuous tenses:

the present continuous (I am working)

the past continuous (I was working)

the future continuous (I will be working)

Perfect tenses are typically used to talk about actions that are completed by the present or a particular point in the past or future. They are formed with the relevant tense of the auxiliary verb to have and the past participle of the main verb. There are three main perfect tenses:

the present perfect (I have worked)

the past perfect (I had worked)

the future perfect (I will have worked)

There is a final set of tenses which combine features of the perfect and continuous tenses. They are formed and used as follows:

Posting....
We use cookies to ensure that we give you the best experience on our website. If you continue to use this site we will assume that you are happy with it.I acceptI declinePrivacy policy