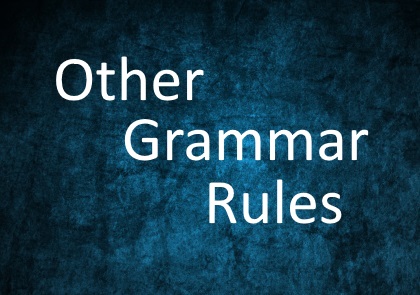 This course contains other grammar rules.

When it comes to English speaking skills, you should not pay too much attention to grammar rules at first. However, this does not mean that we should ignore English grammar completely.Needless to say, basic English grammar rules play an important role in learning English, both written and spoken.

Without grammar rules, you can sometimes make yourself understood with short and simple expressions. However, you may fail most of the time with more complicated expressions that require the correct orders or structures of words.As a beginner, you must know basic English grammar rules, as they show you how to arrange vocabulary and make meaningful expressions.

Below is a series of  basic English grammar lessons covering some rules which are not covered in the other courses because htye stand alone as simple rules which can't have a whole course.. All the lessons are designed with clear definitions, explanations and forms, followed by lots of examples.

Don’t try to learn by heart all the forms without doing any meaningful training. What you really need to do is take advantage of all the English grammar practice through sample sentences – in other words, you must understand how to use each rule and apply it to your daily speech.