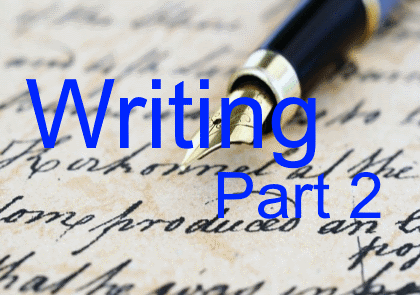 "Writing" is the process of using symbols (letters of the alphabet, punctuation and spaces) to communicate thoughts and ideas in a readable form. Generally, we write using a pen/pencil (handwriting) or a keyboard (typing). With a pen/pencil we usually write on a surface such as paper or whiteboard. A keyboard is normally attached to a typewriter, computer or mobile device. Voice recognition programs allow those who can't see or use their hands to have their thoughts transcribed.

Writing is the fourth of the four language skills, which are:

In our own language, writing is usually the fourth language skill that we learn.

To write clearly it is essential to understand the basic system of a language. In English this includes knowledge of grammar, punctuation and sentence structure. Vocabulary is also necessary, as is correct spelling and formatting.