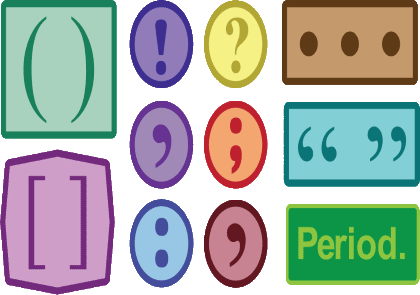 Punctuation is used to create sense, clarity and stress in sentences. You use punctuation marks to structure and organise your writing. There are 14 punctuation marks that are commonly used in English grammar. They are the period, question mark, exclamation point, comma, semicolon, colon, dash, hyphen, parentheses, brackets, braces, apostrophe, quotation marks, and ellipsis. Following their correct usage will make your writing easier to read and more appealing.

You can quickly see why punctuation is important if you try and read this text which has no punctuation at all:

Now let's see if punctuating it makes a difference!

Perhaps you don't always need to use commas, periods, colons etc. to make sentences clear. When I am in a hurry, tired, cold, lazy, or angry I sometimes leave out punctuation marks. "Grammar is stupid! I can write without it and don't need it," my uncle Harry once said. He was not very clever, and I never understood a word he wrote to me. I think I'll learn some punctuation - not too much, enough to write to Uncle Harry. He needs some help!