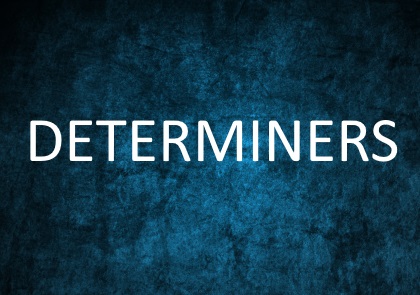 An important role in English grammar is played by determiners – words or phrases that precede a noun or noun phrase and serve to express its reference in the context. The most common of these are the definite and indefinite articles, the and a(n).

Referring means showing us who or what the noun is pointing to or talking about. The most common types of determiners which we use for referring are articles, possessives and demonstratives:

It’s on the sofa. (the means the noun refers to something the speaker and listener both know or are familiar with)

Have you seen my MP3 player anywhere?

Charles is looking for his dictionary. Have you got it? (his means the noun refers to something belonging to a male, in this case, Charles.)

‘Quantifying’ means showing how much of something there is, or how many:

Five people were arrested during an anti-war demonstration in London today.

There are some letters here for you. (some means a non-specific, small number or quantity of something.)

Do you have enough flour to make the bread. (enough means a quantity that is sufficient or adequate for something).