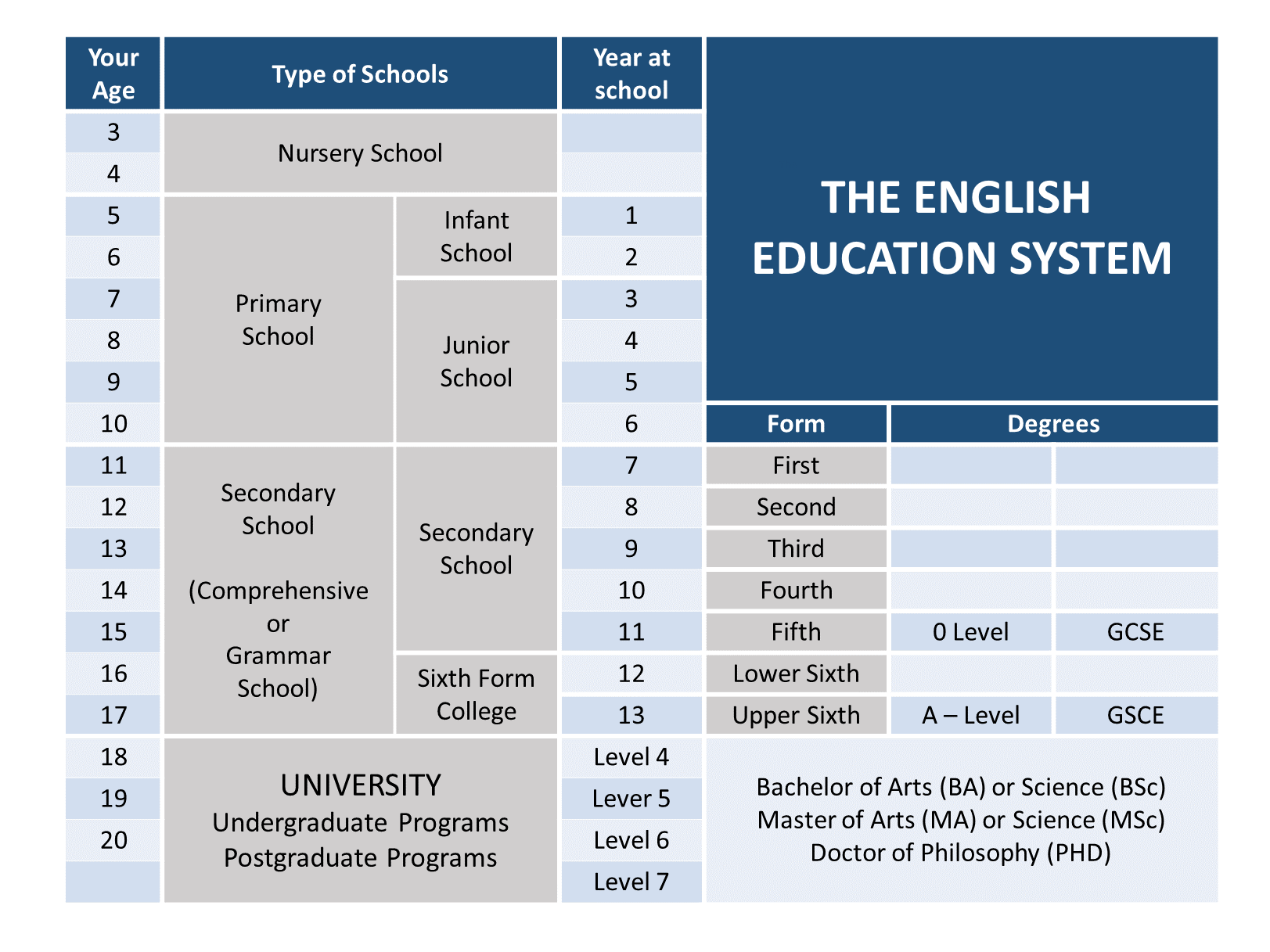 Children's education in England is normally divided into 2 separate stages. They begin with Primary Education at the age of five (5 years old) and this usually lasts until they are eleven (11 years old). Then they move to Secondary School, where they stay until they reach sixteen, seventeen or eighteen years of age (16, 17, 18 years old). The main categories of school are State Schools (Local authority maintained schools) that are Free to all children between the ages of 5 - 16 and Independent schools (Private or Public Schools) where parents pay for their children's' education.

In the UK 93% of the children in England and Wales go to "state schools". State schools are non fee-paying, funded from taxes and most are organized by Local Authorities (LA).

Parents are expected to make sure that their child has a pen, pencil, ruler etc. but the cost of other more specialized equipment, books, examination fees are covered by the school.

Parents are, however, expected to pay for their child's school uniform and items of sportswear. Charges may also be made for music lessons and for board and lodgings on residential trips. Schools may ask for voluntary contributions for school time activities - but no pupil may be left out of an activity if their parents or guardian cannot or do not contribute.

In the UK, the first level of education is known as primary education. These are almost always mixed-sex, and usually located close to the child's home. Children tend to be with the same group throughout the day, and one teacher has responsibility for most of the work they do.

Parents are strongly encouraged to help their children, particularly with reading and writing, and small amounts of homework are set to all children, even during the early years at school.

Most children transfer at the age of 11 - usually to their nearest secondary school, though the law allows parents in England and Wales to express preferences for other schools too. A place has to be offered at the parents' preferred school unless the school has more applicants than places; in that case, it will admit the children who have the highest priority under its published admission arrangements which can vary a little in different places. Most secondary schools cater to both sexes. They tend to be much larger than primary schools.

Education after the age of 16 and above

In England, your child can leave school on the last Friday in June as long as they will be 16 years old by the end of that year's summer holidays. However, all young people must now stay in some form of full-time education or training until their 18th birthday, for example at a college.

Levels of education and Professional Certificates

In England, Wales and Northern Ireland, there are 8 Levels of education after Secondary school– as well as an Entry Level, to help you begin studying or pursue a higher degree. These are set out by something known as the RQF (Regulated Qualifications Framework).

Entry Level is the most basic form of qualification and usually provides an introduction into education. They aren’t generally compulsory. Entry level qualifications are available three different sub-categories, which progressively get more difficult: entry levels 1, 2 and 3. The Entry Level is perfect for Anyone looking to learn a new subject or language, as well as those looking to enter formal education.

Level 1 (often achieved in Years/Class 10 and 11 of Secondary school) is the first formal rung on the numbered system of qualifications. This level is perfect for students aged 15-16, or anyone looking to further their education. You won’t necessarily have to complete an entry level qualification to move onto Level 1.

Level 2 is the next step up from Level 1 (also often achieved in Years 10 and 11of SE). It is perfect for those aged 15-16, or anyone looking to further their education. Because of the high standard of their grades, Level 2 learners will usually progress to Level 3 professional qualifications.

Level 3 generally shows greater knowledge in a subject (often achieved in Years 12 and 13 of SE) or in centres for further education. It is perfect for those who are looking to continue their education at a University or a College, or who want to specialise in a particular subject.

Level 4 is indicative of a greater understanding and a higher level of learning than that gained through core modules at the secondary education level. Level 4 acts as the bridge between level 3 and 5, and can help people progress to the next stage of education when they might not have been able to with their previous qualifications.

Level 5 demonstrates knowledge of a subject which goes beyond what was taught during secondary education. After achieving a Level 5 certificate students can proceed in a Top Up course at a University or a college for a year and get a Bachelor Degree. It is perfect for anyone looking to move on to university, or other forms of higher education.

Level 6 refers to qualifications gained at degree level, indicating the bearer has graduated from a centre for further education. It is perfect for anyone who wants to take their knowledge of a subject past secondary education level – whether that’s to gain a degree of a higher level NVQ or certificate. Also the first step for those looking to pursue a master’s.

Level 7 refers to a level of education equivalent to a master’s degree and is generally attained in a centre for further education. It is perfect for anyone looking for a qualification which validates knowledge beyond degree level. After Level 7, there’s only one more level – a doctorate (PhD) or its equivalent.

Level 8 refers to a doctorate level of education, often known as a PhD. Level 8 is perfect for anyone looking to achieve the highest formal level of education possible in England, Wales and Northern Ireland – and/or become a fully qualified Doctor.